Skip to main content
The University of New Mexico

History of the LGBTQ Resource Center 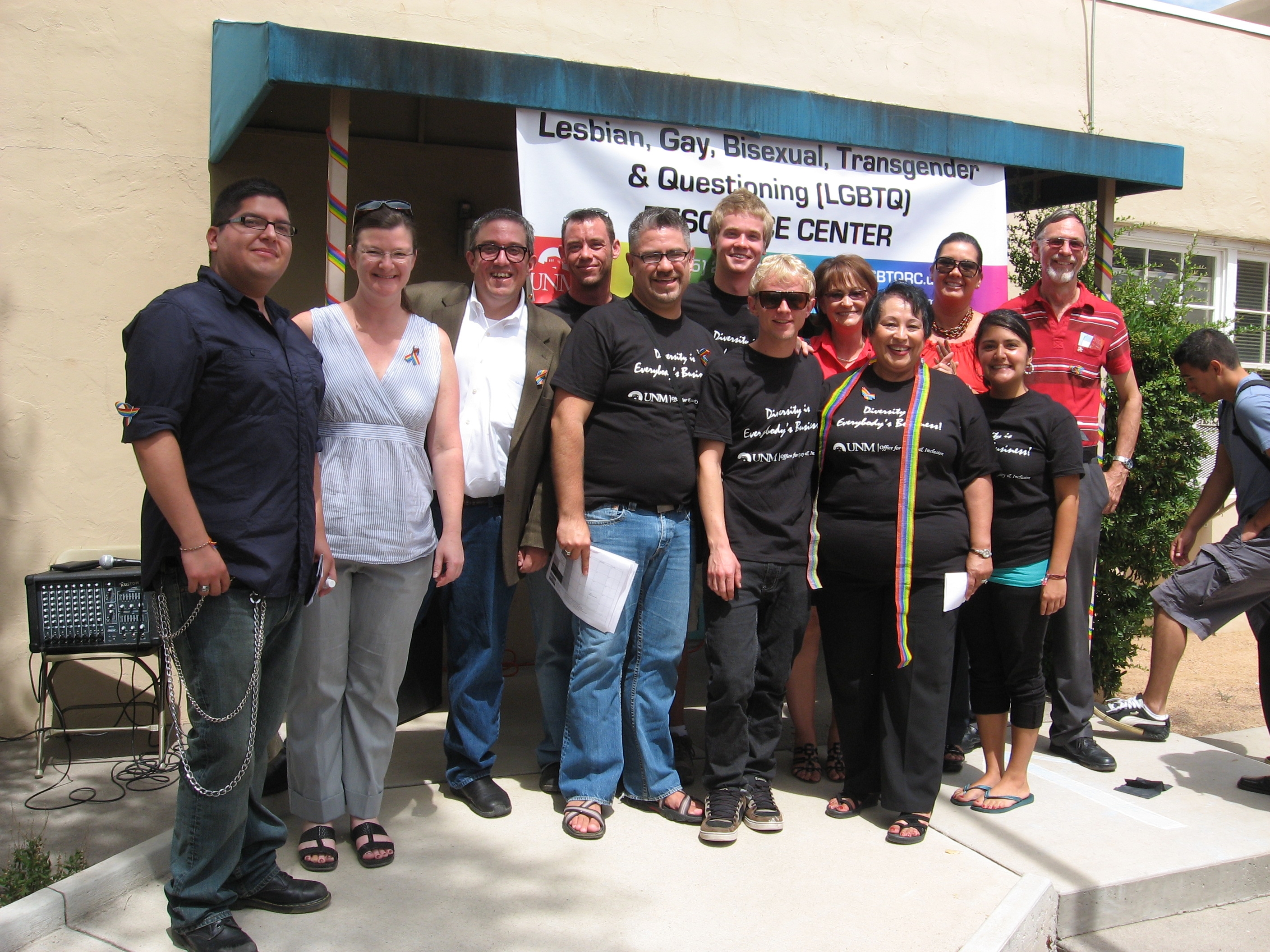 The University of New Mexico’s Lesbian Gay Bisexual Transgender Queer (LGBTQ) Resource Center was begun as a student initiative. Inaugural Vice President for Equity and Inclusion Dr. Josephine “Jozi” De Leon collaborated with students Jeffrey Waldo, David Griffith, and Adam Quintero to secure funding from the UNM Student Fee Review Board. The LGBTQ Resource Center doors open in August 2010 at 608 Buena Vista Drive. In October 2010, Alma Rosa Silva-Bañuelos is hired as professional staff to oversee day to day operations of the Center, and Safe Zone trainings begin to be offered to students, staff, faculty and community. Silva-Bañuelos leads the Center for the next six years.

In February 2011, the LGBTQ Resource Center receives a $300,000 grant from SAMHSA (Substance Abuse and Mental Health Administration) to provide suicide prevention and de-escalation trainings across all UNM campuses as well as creating events and programs to provide holistic care to students on campus. The LGBTQ Resource Center is the first non-counseling site to ever receive this grant.

In May 2011, the first Rainbow Graduation is held in Hodgin Hall to honor LGBTQ and Ally students. In June, the LGBTQ Resource Center represents UNM in the Pride Parade and Pride Fest. Starting in August of that year, after celebrating the first anniversary and welcome back event, the LGBTQ Resource Center begins offering free, confidential HIV testing as well as counseling for students, staff, faculty and community.

Also in 2011, the Queer Voices Roundtable is convened, a collaborative bringing together undergraduate and graduate student groups across campus. In October, the Out and Ally List is published in the Daily Lobo. This list of out students, staff, and faculty as well as Allies becomes a resource for individuals seeking a trusted person on campus. The Resource Center partnered with Albuquerque Public Schools on the Don’t Just Stand There, Stop Bullying Now campaign to bring awareness to the damage bullying can cause. In November, the LGBTQ Resource Center hosted the first annual Transgender Day of Remembrance Candlelight Vigil, to honor members of our Trans family that were taken from us. The Center also helped in the founding of a Delta Lambda Phi chapter at UNM, a gay-specific fraternity.

In spring 2012, the Resource Center also received an increase in SFRB funding, to provide more resources to the UNM community. The LGBTQ Resource Center, in keeping with its mission, begins creating programming aimed at staff and faculty.  ASUNM approaches the Resource Center to help sponsor legislation that would support Universal Restrooms on Central Campus. In the summer, UNM Comes Out for Pride begins, which is the first campus-wide collaborative event that includes departments and organizations all across Central, South, and North Campuses as well as the Health Sciences Center and UNMH. 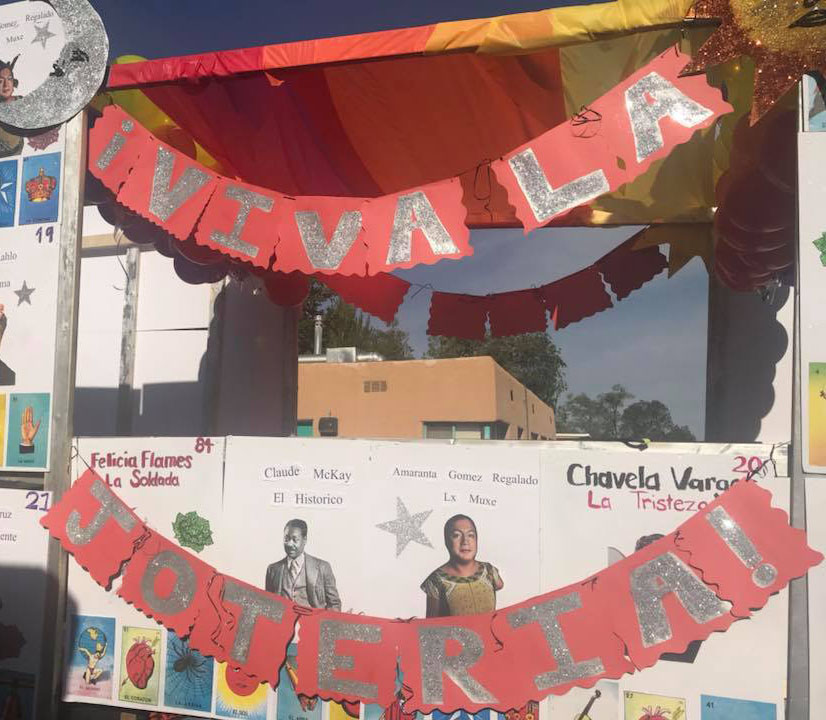 Starting in fall 2012, the Resource Center begins showcasing artwork from UNM students, staff, and faculty. The Center, at the behest of students, begins student peer support groups, Out Womyn and Gentlemen’s Society, to help students with particular identities. Partnering with Projects for New Mexico Graduates of Color, Out Queer Grads, Graduate Studies and Graduate Resource Center, the first Grad Networking GAYla is held. With the assistance of counseling practitioners, “Queer? Let’s Talk” is founded. This support group is led by a counselor and allows students a safe space to discuss stressors surrounding school and being Trans/Queer. In October, UNM hosts the AJAAS (Association for Joteria, Arts, Activism, and Scholarship) national conference. The three-day conference is the first of its kind and launches AJAAS as a national entity. A Queer Course Guide highlighting courses with a Trans/Queer focus is published online.

In January 2013, the LGBTQ Resource Center expands into the entire basement level of the Buena Vista location, leading to an increase in student hires as well as counseling services. The Center also teams up with the Santa Fe Mountain Center and the NM Gay/Straight Alliance for the All Colors Youth Summit; this convening of LGBTQ High School students becomes a predecessor for Rainbow Road to College, a program designed to transition high school students to college. ASUNM involves the Resource Center with creating legislation that will allow for inclusive homecoming voting.

Due to increasing concerns brought forth by students, the LGBTQ Resource Center begins the Preferred Name Initiative, to find a solution for students, staff, and faculty who are transitioning but have not taken legal steps yet. At the end of the academic year, Lavender Graduation is held to honor graduating high school LGBTQ students who at the time were forced to wear graduation gowns that did not correspond to their gender identity.

In fall 2014, the NM LGBTQ Roundtable is established to bring together LGBTQ and Ally organizations across the state so that organizing is streamlined and master calendars are created. Responding to a pressing need from the Gallup branch campus, a satellite office is opened to serve students in Gallup as well.

The LGBTQ Resource Center is identified by BestColleges.com as one of the Top 30 Best Colleges in the nation for LGBTQ Students for providing inclusivity and resources to LGBTQ and non-conforming students.

In spring 2015, the LGBTQ Resource Center receives the Models of Hope Award from Pride and Equality.

In summer 2015, UNMH LGBT Collaborative along with the Resource Center host the first social on North campus to increase LGBTQ visibility. MALCS (Mujeres Activas en Letras y Cambio Social/ Women active in scholarship and social change) is brought to UNM. Over 200 scholars attend the conference, helping to grow the group.

In fall 2015, the Leads with Pride program is launched to engage incoming freshmen and to help track their progress. This group creates study sessions, information sessions and social outings to engage and work with freshmen. Felicia Flames, legendary Transgender activist, comes to UNM to speak at the 5th annual Transgender Day of Remembrance event.

In spring 2016, the LGBTQ Resource Center is selected to present at the QTPOCC (Queer and Trans People of Color Conference) at UC Berkeley. The UNM community rallies behind the LGBTQ community after the mass shooting of 49 people in Orlando. A candlelight vigil is held at the Duck Pond to honor the lives of the community lost.

In December 2016, Dr. Lawrence Roybal is appointed to lead the LGBTQ Resource Center and concurrently serves as Acting Vice President for Equity & Inclusion.

In fall 2017, the Preferred Name Initiative begins setting benchmarks for the program. The LGBTQ Resource Center moves from its original location to a renovated space at 1919 Las Lomas NE. The new, more accessible space was made possible through a state capital allocation by UNM Alumnus and New Mexico Senator Jacob Candelaria.

The University of New Mexico is honored as the top educational institution at the 9th Annual Outstanding Awards, hosted by Albuquerque Pride.